Why is it important?

Justification, in it's simplest sense, means to be declared righteous before God. Let me stop here quick and just say that "Justification" is not "Just as if I didn't sin." That is a gross false representation of what true justification is. Justification says, "you did sin, you are a sinner, but I'm going to forgive you and declare you righteous anyway."

Romans 3:21-26
"But now the righteousness of God has been manifested apart from the law, although the Law and the Prophets bear witness to it—  the righteousness of God through faith in Jesus Christ for all who believe. For there is no distinction: for fall have sinned and fall short of the glory of God, and are justified by his grace as a gift, through the redemption that is in Christ Jesus, whom God put forward as a propitiation by his blood, to be received by faith. This was to show God’s righteousness, because in his divine forbearance he had passed over former sins. It was to show his righteousness at the present time, so that he might be just and the justifier of the one who has faith in Jesus."

We are justified, declared righteous, at the moment of our salvation. Justification does not make us righteous, but rather pronounces us righteous.

2 Peter 3:18
"But grow in the grace and knowledge of our Lord and Savior Jesus Christ. To him be the glory both now and to the day of eternity. Amen."

I find this chart immensely helpful when thinking about how Sanctification works: 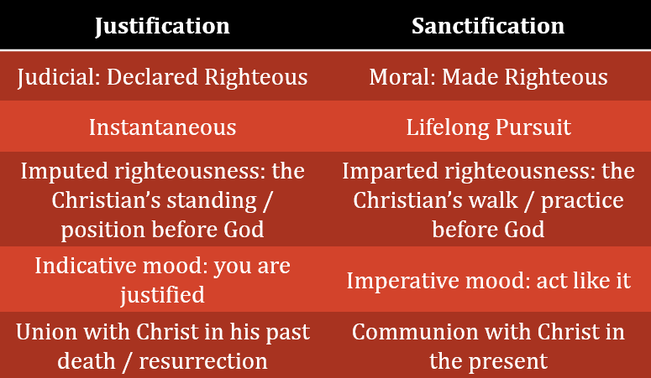 Often times when I talk about Justification and Sanctification, I talk about them in two different lights. I think what we need to be careful of though is completely separating the two. You can't have one without the other, but they are two distinct aspects of salvation.

This is the part that I want to stress here though. How you view Justification and Sanctification will have a direct impact on if you believe in a works based salvation, or a faith alone, by grace alone salvation.

See, we like to put off good works. And we like to use grace as an excuse to sin. To which Paul's response in Romans 6 is "May it Never Be!"

Works don't count in terms of justification, there is nothing you can do to earn salvation, but a proper view of salvation indicates that after justification, comes the fruit of sanctification which is where works do matter. Works are an outpouring of your faith.

Are you growing in holiness? I'll leave you with this passage: 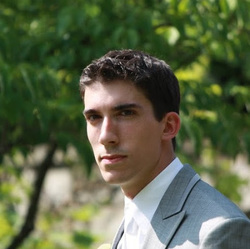 I graduated Lancaster Bible College in 2010 with a BS in Bible. I have been a Sunday School Teacher at Faith Bible Fellowship Church since 2012.